In case you missed it, last Thursday was the 84th anniversary of the first canned beer. It’s true, canned beer was only invented in 1935.

No, it was not brought into existence by the Big Bang. And no, cavemen did not crack open a cold can with their buddies as they sat by the fire, rolling around their newly invented wheel.

They may very well have been drinking something like beer (the practice of fermentation has been around for tens of thousands of years, long enough for primitive hunter-gatherers to enjoy!), but they died long before they could enjoy their alcohol out of a can. Sorry, guys. 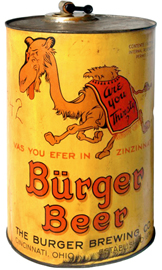 The bottled vs canned beer has been a point of contention since the inception of canned beer. Is beer tastier when sipped from a cold, solid bottle? Or is it better enjoyed from the metallic confines of a can? Were the canless nomads of ancient times really missing anything?

(Well, they didn’t have bottles, either, so I guess what they never knew won’t hurt them. My metaphor has gone on for too long. Retreat!)

There have been various studies about the effectiveness of beer vessels. Can the average person taste the difference between a bottled Heineken and a canned Heineken? Sort of. According to one HuffPost study, 52% of participants were able to correctly identify canned Heineken over the bottled stuff, and 68% even preferred it.

The same study concluded that on average, 54% of participants were able to correctly guess whether a beer was canned or bottled.

But what is the difference, really? I can’t crush a bottle when I’m done with it, but I also can’t admire the beautiful sight of light shining through glass when the beer is in a can. ...Yikes, maybe I’m not the best choice to answer.

Alcohol Professor says it’s all in your head, and most likely stems from beer marketing from the beer companies themselves. It doesn't matter what people are talking about, as long as they're talking about your beer! Start a hashtag? Even better!

Thrillist compared the two and covered some important distinctions. Canned beer is enclosed; light cannot spoil the beer, and therefore it has a longer shelf life.

With the recent explosion of independent, creative breweries, beer-makers are doing new and interesting stuff with their drinks, including aging them like wine. Would beer age better in a can? Thrillist says we just don’t have the research to make a call.

The bottom line? Enjoy your beer the way you want. There isn’t anything that says conclusively that one is better than the other. Just be glad cans and bottles were invented at all, and we’re not just drinking beer out of, like, the lifeless shells of dead animals or something. You know, how they did in prehistoric times.


If you love beer but can’t be bothered with the drama, pick up one of our many beer shirts!