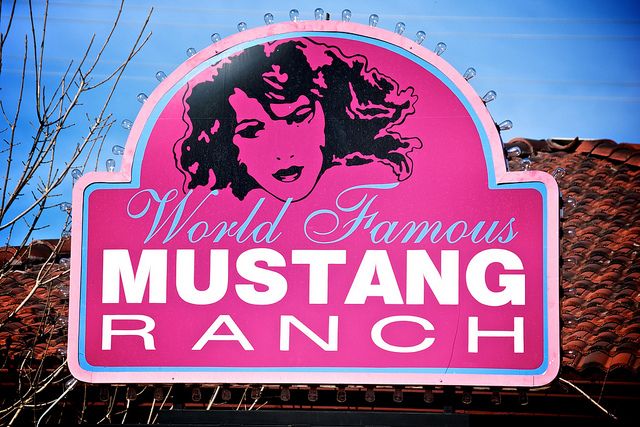 Most people know in some way or another that prostitution is legal in Nevada. It is the only state with such allowances, and in most other places, prostitution and brothels are considered some of the biggest taboos-- and the biggest known secrets.

Despite the state’s apparent openness to women of the night, there is no blanket legalization like you might think. Prostitution is still illegal in several counties and Nevada’s biggest cities: Reno, Carson City, and even Las Vegas.

...Unsurprisingly, the majority of Nevada’s prostitution still occurs in Las Vegas and Reno.

Inspiring today’s post is this neat t-shirt we just posted that is 1970s tourist merchandise for Mustang Ranch, Nevada’s first (and largest) brothel. “Mustang Ranch Trainee.” Click here to shop! I’ll let you guess what you’d be training for… Mustang Ranch was originally located about 8 miles outside of Reno. It was opened in the ‘50s as Mustang Bridge Ranch, and operated illegally for two decades until prostitution was legalized in parts of Nevada. In the meantime, Mustang Ranch was bought by Joe Conforte and his wife Sally in 1967. Conforte was a Sicilian cab driver, brothel owner, and occasional criminal. His political and social clout played a hand in the Nevada legislature's eventual legalization of prostitution in 1971. Mustang Ranch became the very first licensed brothel, with more recognized regulations than the underground operations that came before. Brothels were never illegal per se, but would often be closed down for being “public nuisances”. In 1971, as a result of Conforte’s political meddling, brothels were allowed to obtain legal licenses to operate. This meant they had to follow some extra rules, but as long as they did, the government could not shut them down.

Joe Conforte on the cover of Rolling Stone in 1972.
Click here for the fascinating article.

There are ten Nevada counties that permit prostitution, and within these counties, brothels are only allowed to operate in rural areas with small populations (which is why prostitution is implicitly illegal in high density areas like Reno and Las Vegas, despite public belief otherwise). Licensed brothels must also provide doctors to check their employees for STDs, and owners can be held liable if inconsistent condom use causes an STD outbreak, particularly in cases of HIV.

Don’t get me wrong-- all was not sunshine and rainbows in the land of Joe Conforte and legal brothels.

Mustang Ranch saw several cases of arson during its early years, and was rebuilt several times throughout the 70s and 80s. Argentine boxer Oscar Bonavena was shot and killed on the brothel’s front steps after several altercations with Conforte. Bonavena was having an affair with Conforte’s wife, and after banishing him from the Ranch’s grounds, Conforte ordered his bodyguard to shoot Bonavena on sight if he came around again. Not long after, Conforte was charged with racketeering and tax fraud, and he fled to South America to avoid jail time. Mustang Ranch’s original reign ended with government forfeiture and a long legal battle for the rights to the Ranch’s name and branding.

Today, there are 21 legal brothels operating in Nevada’s arid deserts, and Mustang Ranch (under new ownership) remains one of them, offering their traditional “services” as well as tours for the simply curious.