T-Shirt Tuesday - Star Trek and All Its Friends The iconic beginning to the most influential sci-fi shows of all time. Whether spoken by Captain Picard or Captain Kirk (or emotionally recited along with the intro as you binge the show on Netflix), it embodies everything the series has stood for since its inception.

Explore new ideas, do what no one else has done, seek out the unknown- everything the Star Trek crews experience in deep space mirrors the leaps and bounds the show has taken in the real life to help us understand the world (and each other) just a little bit more.

The original show ran for three years in the late 60s, and again as an animated program in the mid 70s. Star Trek: The Original Series was the initial link in a chain reaction that is still burns today.

(That is to say: Star Trek is still immensely popular. Word.) Captain Kirk’s USS Enterprise stood almost entirely alone with its multicultural and multiracial cast. At a time when television was predominantly white and WASP-y, this was an important step in broadcasting what America really was: a hugely diverse landscape with problematic socio-cultural borders that were just beginning to crumble. TOS’s diverse cast included crew members from many backgrounds, and one of television’s first interracial kisses, between Captain Kirk (William Shatner) and Lt. Uhura (Nichelle Nichols).

It's beauty, it's grace, Kirk and Uhura kissed in space.

At one point, Nichols was approached by Dr. Martin Luther King at an NAACP fundraiser and, shocked that she was thinking of leaving the show behind, told her she was a “part of history”. He encouraged her to stay, saying she was an important role model for black children and young women who needed a figure like her on TV to look up to.

Nichols went on to work with NASA to promote careers in space exploration and science to young women in America. Star Trek inspired a ton of kids to look towards STEM, and even encouraged the inventions of technology such as palm PDA devices, which were widely used in the show, but did not exist as usable tech.

In 1987, The Next Generation aired, starring Sir Patrick Stewart as the intensely stern, fiercely loyal, and (mostly) bald Captain Picard. This iteration of Star Trek pushed farther into space, dealing with themes like grief and loss, gender and race, colonialism, and the ethics of interfering with natural evolution. Check out these funky space friends.

And as always, lots of cheesy special effects. We can never forget some of the insanely, uh… inventive sets and makeup they passed off as distant alien societies. Someone explain this. Please. For God's sake.

The cult following that the original show brought forth had grown, and what followed was spin off after spin off: Deep Space Nine (1993), Voyager (1995), Enterprise (2001), and the most recent, Discovery, which aired in 2017. Each show delves into different issues, different characters, and of course, different aliens! (Picard voice) Make it so. 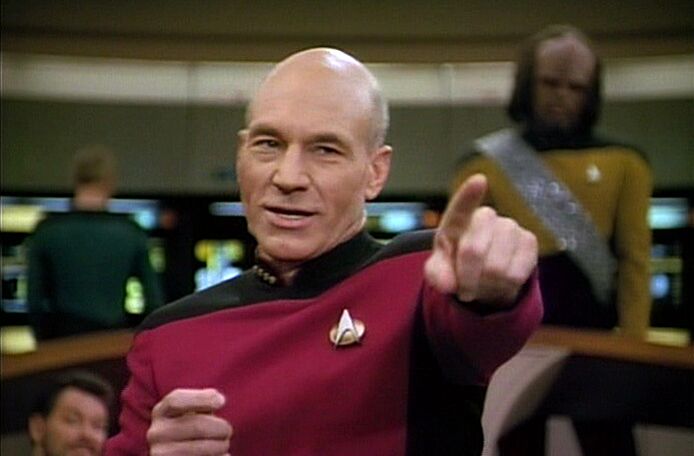