Can something fictional become real? It sounds like crazy talk. But today’s featured t-shirt stars The Monkees, America’s original boy band and the first of its kind to take a fictional act and make it a real hit! The shirt, seen above in a photo from our Fall Lookbook, commemorates the band’s 20th anniversary tour, which began in 1986 and featured three of the original Monkees: Micky Dolenz, Peter Tork, and Davy Jones. At the time, the 4th Monkee, Michael Nesmith, was contractually unable to perform with his former bandmates.


The Monkees are not alone on the path from TV to live musical act. Since the 1960s, there have been plenty of pop acts that transformed from television sweethearts to real musicians. Just check the Disney Channel. Or don’t. Your brain might start to melt. 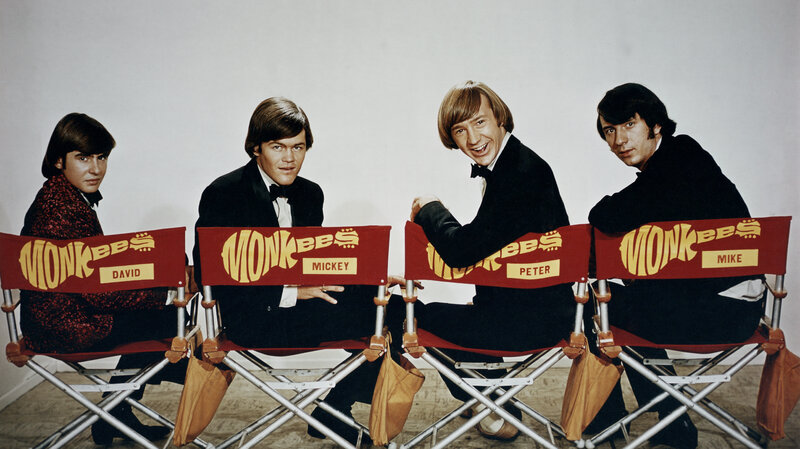 The Monkees began as America’s answer to The Beatles in the form of a fictional TV show. Their eponymous show, which aired from 1966-1968, followed the boys’ adventures as aspiring musicians on their way to rock n roll stardom. Peter Tork, Michael Nesmith, Micky Dolenz, and Davy Jones were actors and musicians chosen from hundreds of applicants to frontline the show AND the band.


But… the band didn’t really exist, at least at first. The boys were all playing instruments they weren’t experienced with, and their roles were swapped in favor of who looked the best performing the task, not who was actually skilled. They didn’t even write their own songs, despite wanting to. Did you know that Neil Diamond wrote “I’m a Believer?” So it was not until 1967 that The Monkees existed as a real band outside of the show.

When The Monkees TV show debuted in 1966, it was a huge hit. However, the TV show’s success hurt The Monkees’ success as an independent band. People overlooked the fact that The Monkees had begun to write and produce their own music, and the public ultimately assumed the band was just some manufactured Beatles clone as opposed to a group of musicians who had a passion for their work.


In the 1970s, the group broke up, but their popularity seemed to grow steadily anyway, and they have held several anniversary tours throughout the years.


Want your piece of Monkees history? Check out our collection of Monkees t-shirts!

Davy Jones of The Monkees