Happy T-shirt Tuesday! This week, we’ve got a bunch of nostalgic vintage Atari tees. Check them out here! Atari’s 1980 game Asteroids was the simplest concept: a spaceship destroys all asteroids and flying saucers that get in its way. That’s how space travel works… right?

Asteroids was hardly the first game that was released for the Atari 2600. This legendary console was released September 11th, 1977 for about $200. With the amount of digital space we are used to in 2018, it’s incredible to think that the original Atari only had 128 bytes of hard drive space.

For comparison’s sake, there are one million bytes in a megabyte, and one thousand megabytes in a gigabyte. Our computers and phones and game systems have dozens of gigabytes of space, can you imagine what sort of program could run on 128 bytes?

Well, that’s why the Atari games tended to look like this: Atari didn’t do so well at the beginning. It sold, but the Atari wasn’t associated with any games that had the “wow factor” that consumers craved. There were games like BASIC Programming, which taught rudimentary computer programming through the Atari system; a very basic bowling game called (you guessed it) Bowling; a blackjack game, simply titled Blackjack, whose rules were so strict and unrealistic that the player would have had an exceedingly difficult time winning; and Street Racer, one of the original nine titles released for the console, a game that had players race blocky cars down a simplistic track.

There was a pattern: many early games were almost utilitarian in their goals. Games like Blackjack, Bowling, and Golf all attempted to bring real activities to the electronic screen, but there was little room for innovation and fantasy. “Gamification” was still a new concept in video games.

Asteroids came out shortly after Atari’s breakout game, Space Invaders. Both games previously existed inside arcade cabinets, but now you could have the arcade experience at home. And games like this were fun! Why would you want to live boring old real life inside a video game? We want to shoot lasers at aliens, not learn how to do taxes! 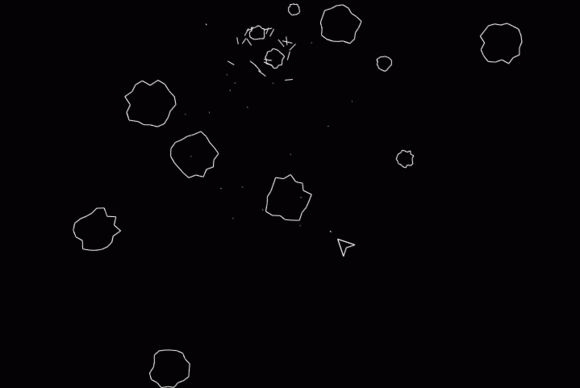 Thus ushered in the golden age of video games. Suddenly, everyone wanted these little electronic boxes of fun. And the rest is history.

Video games have been around in various forms ever since. Show off your love of games, whether they be new or old, with one of our classic game tees! Check them out on our website, and take an extra 25% off for our Black Friday sale!! Strategy fan? This is the shirt for you!

Blast off with this cool tee!